Diazepam (better known by its brand name Valium) is a benzodiazepine used to treat anxiety, seizures, alcohol withdrawal, and muscle spasms. While the drug can be very beneficial for these types of use as prescribed by a doctor, it is also commonly abused for its ability to cause an intense high when taken in large doses.

Diazepam withdrawal can occur as the result of any type of use, licit or illicit, as long as the individual has taken the drug consistently for a long enough period of time. When an individual begins to experience the withdrawal effects associated with the drug, usually the safest option is to attend detox treatment in a professional facility. Call 800-405-2627 (Who Answers?) today to find reliable detox centers where you can put an end to your diazepam dependence and abuse as safely and effectively as possible.

Diazepam detox works by treating the symptoms of withdrawal, minimizing them so the individual does not experience severe or dangerous symptoms in the way they would if their syndrome went untreated. According to the National Library of Medicine, it is extremely risky to stop taking the medication suddenly and without talking to your doctor. Whether you are abusing the drug or not, dependence can swiftly take hold, and you will be likely to experience withdrawal symptoms if you attempt to stop using the drug without the proper treatment.

In most cases, an individual in diazepam detox will be weaned off the drug slowly in order to make their symptoms less severe. In addition, they will often be given other medications and treatments in order to round out their care and make it safer. However, detox, while often utilized as a first step of addiction treatment, does not treat addiction itself. As the National Institute on Drug Abuse states, those who have been abusing diazepam should receive a follow up treatment that utilizes “behavioral-based therapy and/or a medication.”

Detox from diazepam requires intensive treatment, the goal of which is to minimize withdrawal symptoms, end dependence, and help the patient transition into addiction treatment when necessary. This is not an easy task, which is why it is so important to attend an appropriate detox program for your needs.

Diazepam is a benzodiazepine, a prescription sedative that can cause severe side effects when taken in large doses. Unfortunately, benzodiazepines also cause an intense withdrawal syndrome that can be deadly if not treated properly. According to the National Highway Traffic Safety Administration, the common withdrawal symptoms associated with diazepam and other benzodiazepines include: 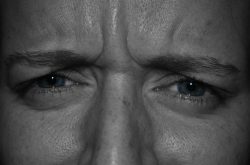 Sensitivity to light and sound is a common diazepam withdrawal symptom.

Sadly, though, these withdrawal symptoms are not the end of the possible issues associated with diazepam dependence. Many individuals are likely to experience severe anxiety, which can even turn into fear and terror. Panic attacks are common among those withdrawing from the drug. Dysphoric effects can worsen into actual depression, which requires multiple treatment options during detox and beyond. Those who abused the drug are also likely to undergo severe withdrawal symptoms without warning.

According to the Semel Institute for Neuroscience and Human Behavior, “In rare cases, withdrawal from the drug can also result in psychosis and convulsions.” It is more common for someone to experience worsening seizures as the result of withdrawal if they originally were taking it to treat this issue, but seizures as the result of withdrawal can occur without warning, even in those who have never experienced them before. In addition, psychotic symptoms can occur and create a full-blown syndrome where individuals experience

These symptoms must all be treated in diazepam detox in a way that is sensitive to the needs of the patient. Usually, like in most detox programs, each symptom is treated as it occurs in order to ensure that the program is appropriate for the individual. According to the US Food and Drug Administration, “Since the risk of withdrawal phenomena and rebound phenomena is greater after abrupt discontinuation of treatment, it is recommended that the dosage be decreased gradually.” Weaning the patient of the drug or a similar drug often minimizes most of the symptoms across the board. This does not mean that each symptom won’t still require different treatment options, though.

For example, dysphoria, especially dysphoric symptoms that intensify and become a severe depressive disorder, will often require antidepressants as an additional treatment option. Patients who are experiencing depression as an effect of their diazepam use or abuse should be able to receive antidepressants, as these medications can be just as helpful for someone in this position as they can for someone with unrelated depressive symptoms. Often, behavioral therapy can be used to help patients examine their symptoms and learn to cope with them more easily for as long as they may last.

Anxiety can often be treated in much the same way. In addition, individuals who are in danger of experiencing seizures also require specific treatment options, and anyone who does should be monitored 24/7 in order to ensure that their condition does not worsen. Severe psychosis, which usually occurs early on in withdrawal, often requires treatment in a quiet, dark room with little to no stimulus. Some patients do need medications, including antipsychotics, at this time, but the symptoms of psychosis normally subside after a few days in treatment.

Like with all benzodiazepines, it is extremely unsafe to attempt to detox at home after becoming dependent on diazepam. Benzodiazepines have a possibility of causing severe withdrawal symptoms, and anyone who goes through withdrawal without the proper treatment is putting themselves at extreme risk. Therefore, it is unsafe to go through detox at home without the proper medical attention a professional detox center can provide you.

Family members and friends will not be able to provide the proper care at home for diazepam detox, especially if the individual is at risk of experiencing depression, severe anxiety, psychosis, and/or seizures. Even someone who believes they are not at risk, however, could also still experience severe symptoms.

One can experience these serious symptoms without warning, which is why it is usually safest for the individual to be in a residential detox program rather than an outpatient center. According to the South Australian Government’s Health Department, “If the patient has been using more than 50mg diazepam [or its] equivalent, then they should be initially managed in an inpatient setting.” This is because severe withdrawal symptoms are extremely likely to occur in this instance. Other reasons why an individual should not attend outpatient detox include:

In some cases, though, outpatient detox can be the correct choice. However, it must be noted that, even if you feel outpatient detox will be beneficial for your needs, at no point should you attempt to detox at home without any kind of professional help.

How Long Will Diazepam Detox Take?

It is difficult to gauge how long diazepam detox will take, especially because treatment programs for withdrawal and addiction often take as long as necessary for the specific individual’s needs. According to the medical journal titled Addiction, though, benzodiazepine withdrawal has three separate patterns that could help you gain an idea of how long your detox program for diazepam might last.

In general, your detox program will likely take at least a week or two but may stretch out for a month or longer depending on how severe your symptoms are. Experiencing issues like depression, anxiety, psychosis, and/or seizures can increase the amount of time you may need to spend in your detox program. In addition, those who were abusing the drug will also often require longer detox programs. If you did abuse your diazepam medication (or someone else’s), you will require further treatment for addiction, which most detox programs help patients transition into after their withdrawal symptoms begin to subside.

Finding a diazepam detox center can be difficult, as it is important to choose the program that best suits your needs. Let us help you find the right program today by calling 800-405-2627 (Who Answers?). We will match you to the best option for your current situation and allow you to receive help in a safe, controlled treatment environment. Call today and begin your journey of recovery by putting an end to your diazepam dependence.