Opiate addiction is one of the most difficult addictions to overcome. According to Harvard Medical School, opiates are only outranked by alcohol as humanity’s most widespread and most persistent drug problem. Despite this, opiate addicts have methods to break their addiction, the most effective of these methods being detoxification combined with medicinal drugs.

While many addicts try to break their addiction by detoxification alone, this method is usually not effective. Many addicts will start taking opiates again after they experience the withdrawal symptoms that can include agitation, anxiety, tremors and many other symptoms. To help opiate addicts through the withdrawal stage, medications such as opiate methadone, buprenorphine, and naltrexone are often recommended, according to the Substance Abuse and Mental Health Services Administration. 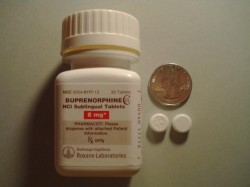 Buprenorphine is on e of the medication therapies used in the treatment of opiate addiction and the detox process.

Opiate methadone is a commonly used drug to help opiate addicts. This drug can be taken orally or it can be injected. Usually the first dosage will be high but the amount of opiate methadone used will be gradually scaled back during the detoxification, which is generally about a week. This medicine is only available by going to a methadone clinic or seeing a doctor in person.

In many cases, a week is not long enough to break the addiction. With severe cases like this, opiate methadone is often paired with a long drawn out detoxification process. This pairing is commonly referred to as opiate methadone maintenance. The detoxification process is done at the direction of a medical professional over an extended period of time, over months or even years. Other times, this maintanence process can be indefinite. If doctors feel that the patient has a chance at breaking the addiction, doctors will gradually scale back the amount of methadone and attempt to detox the patient.

Buprenorphine is a partial opioid that is taken several times a week orally, the pill being held under the tongue, according to the National Institute on Drug Abuse. If taken in large amounts, buprenorphine produces an opiate like effect because it occupies the same nerve receptors that both heroin and morphine affect. It helps to relieve the cravings without producing the dangerous side effects caused by the original opiates.
The drug buprenorphine has also been paired with naloxone and is commonly known as Suboxone. This medication is usually preferred as opiate addicts don’t have to go to a clinic to receive their dose.

Naltrexone is another medication that is sometimes used to assist with detoxification. This drug acts as an opioid receptor blocker. It is used to help reverse the effects of an opiate overdose, however, it cannot be used alone.

Medication is Usually Not Enough

Regardless of which avenue a person takes, medication during the detoxification process is usually not enough to break the cycle. Many people have spent years with their addiction and no longer know how to function. In severe cases, the medication detoxification method is usually accompanied by therapy.
By combining medication and therapy with the detoxification process, addicts have a much better chance at permanently breaking their addiction. Doctors at the clinic provide therapy, or if a patient is in rehab, group and individual therapy is often available.