Dangers of Delirium Tremens and the Need for Detox Treatment

According to the Journal of Family Practice, an estimated five percent of people experiencing DTs die from health complications. Rather than just a symptom of chronic alcohol abuse, delirium tremens is considered a full-blown medical emergency that requires immediate attention.

Someone who tries to stop drinking after a long history of alcohol abuse may well experience DTs shortly after taking his or her last drink. Under these conditions, there’s a critical need for the 24-hour monitoring and medical care that detox treatment programs provide. 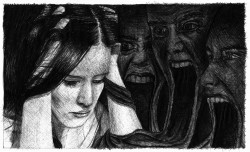 Delirium tremens can cause visual and auditory hallucinations.

Alcohol easily integrates within the brain’s chemical system. With each drink, alcohol causes the brain to release unusually high levels of GABA and glutamine, two essential neurotransmitter chemicals. According to the University of California Irvine School of Medicine, these chemicals regulate electrical activity throughout the brain and central nervous system (CNS).

The brain readily adapts to the effects of alcohol over time. This means, as alcohol levels increase the brain reduces its own self-directed neurotransmitter chemical outputs in response to alcohol’s ongoing effects.

After a certain point, the brain and CNS can’t function properly without alcohol. With long-term drinking, this dependence reaches a point where major bodily systems can shut down or become overloaded when alcohol is withheld.

Bodily systems most affected by alcohol’s effects include:

Delirium tremens occurs when one or more of these systems break down in the absence of alcohol.

Delirium tremens is considered the most severe form of alcohol withdrawal. In most cases, symptoms of delirium tremens appear within two to four days after a person’s last drink.

In effect, the absence of alcohol “short-circuits” the brain, throwing off the brain and central nervous system’s delicate electrical/chemical balance. Delirium tremens effects may take the form of:

Seizure episodes in particular can be especially serious, with as many as 25 percent of heavy drinkers experiencing grand mal seizures during detox withdrawal.

The Need for Detox Treatment