Lorcet is the brand name drug that contains hydrocodone and acetaminophen. The drug is commonly used as a treatment for pain, but the hydrocodone in it can also cause addiction if it is abused in large doses. Unfortunately, this type of abuse occurs often, but any individual can become dependent on the drug after using it for a while and experience withdrawal symptoms as a result.

If you are suffering from Lorcet dependence, call phone now to find safe, reliable detox centers where your withdrawal can be managed safely.

Lorcet detox works the same way that other types of opioid detox programs do; according to the National Library of Medicine, “Treatment most often involves medicines, counseling, and support.” An individual is brought into their detox center and begins a regimen of at least one type of medication used to minimize withdrawal symptoms. Behavioral therapies are also commonly used, and patients who have been abusing Lorcet are helped to transition into addiction treatment after their withdrawal symptoms begin to subside.

Withdrawal from opioids creates incredibly uncomfortable and painful symptoms that, while not actually life threatening, can be extremely difficult to bear without the help of medications and professional treatment. As stated by the Substance Abuse and Mental Health Services Administration, the withdrawal symptoms associated with the hydrocodone found in Lorcet include: 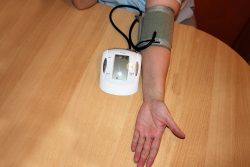 High blood pressure is a common symptom of Lorcet withdrawal.

The withdrawal syndrome is normally described as being uncomfortable and flu-like, but this can exclude the extreme pain many people experience. The pain associated with this syndrome is severe, especially because most people who have been either using or abusing medications like Lorcet have a low tolerance for pain. In addition, depression can be another serious symptom of this disorder.

As stated above, medications and counseling are the main treatment options during Lorcet withdrawal. Usually, one of three medications is used to treat the syndrome.

Clonidine is often used to treat symptoms quickly, though it cannot minimize nausea and vomiting. Methadone is often necessary for those with severe dependencies who require a stronger medication to minimize their symptoms while those who take buprenorphine often have less severe symptoms and can be treated with a milder medication.

Patients must be screened for depression, as this is an extremely serious potential symptom that can cause suicidal thoughts and other dangerous effects. Depression, anxiety, and other psychological effects of Lorcet withdrawal may be treated with a combination of medication and counseling.

It can sometimes be safe to detox from opioid withdrawal at home, especially because the syndrome itself is not life threatening. However, one must still attend a professional detox program, potentially in an outpatient capacity if one’s social supports and responsibilities can help them during the process. Those who experience severe symptoms should still consider residential detox, but anyone going through withdrawal from Lorcet must receive some sort of professional help.

Many individuals believe they can taper their medication off on their own, which is extremely dangerous. In addition, those who do not attend some sort of detox program often do not seek addiction treatment after their withdrawal syndrome has ended, which means they will not be able to recover from their addiction. Even if you choose to detox at home, make sure to go through a professional program in some capacity.

How Long Will Lorcet Detox Take?

Lorcet detox will usually take at least a week and may be a longer program for individuals who are struggling with more severe symptoms. According to Harvard Medical School, long-acting opioids like hydrocodone are likely to cause less intense but longer-lasting symptoms, so there is a possibility that you will be in detox for at least a week or more before moving on to the addiction treatment phase.

As stated by the Prescription Monitoring Program, “Combined hydrocodone and acetaminophen is one of the most widely prescribed pain relievers and has become one of the most frequently abused drugs nationwide.” We can help you put an end to your Lorcet abuse and addiction, starting with medically supervised withdrawal.

Call 800-405-2627 (Who Answers?) now to find detox centers that will cater to your needs and allow you to recover as safely as possible.