Of all the drugs to get addicted to, marijuana detox probably offers the least uncomfortable withdrawal symptoms. While these symptoms are generally milder than those caused by other more potent drugs, recovering users may still have a hard time staying drug-free.

With long-term use, the effects of marijuana leave the body in a state of chemical imbalance that quickly becomes apparent once a person stops using. The duration of a marijuana detox period can vary depending how the drug was used and for how long.

Marijuana detox symptoms result from the effects of regular marijuana use on a person’s brain functions. According to the National Institute on Drug Abuse, when smoked, marijuana moves from the lungs directly into the bloodstream and throughout the body. The brain, in particular, houses special cell receptor sites that normally secrete chemicals known as endocannabinoids. These chemicals behave in much the same way as marijuana. When marijuana is present in the brain, it triggers the release of endocannabinoids much like the body’s natural chemical processes do. 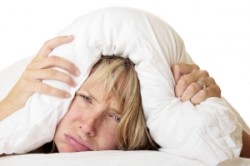 Restlessness and insomnia are some of the withdrawal symptoms associated with marijuana. They will subside once your body adjusts!

Endocannabinoids actually have their own neural communication network inside the brain known as the endocannabinoid system. This system helps regulate a wide range of functions, some of which include:

Marijuana effects over-stimulate this system to produce the feelings of relaxation, euphoria and calm a person experiences when high. Over time, the endocannabinoid system comes to rely on marijuana’s effects to the point where it can’t function without the drug. So when someone stops using, all the functions managed by this system start to breakdown and cause the marijuana detox withdrawal symptoms normally experienced.

With ongoing use, THC – the active ingredient in marijuana – essentially drains the brain of vital neurotransmitter chemicals. The repeated triggering of endocannabinoid receptor sites cause large amounts of dopamine, serotonin, GABA and acetylcholine to be secreted. As a result, people in marijuana detox experience both psychological and physical symptoms.

In addition to the usual symptoms, people who suffer from underlying psychological disorders, such as bipolar disorder, depression or anxiety may also experience even more severe disorder-related symptoms during a marijuana detox period.

The length of time a person can expect to experience withdrawal effects will vary depending on:

Marijuana has fat-soluble properties that allow it to store up inside the body’s fat tissues for long after a person stops using. So someone with a high fat content may experience withdrawal effects for a longer time than someone with a low fat content. In effect, marijuana can stay in the body from anywhere from two to 30 days depending on the person.