How Does Rapid Opiate Detox Work?

Rapid opiate detox is shortened version of standard detox in which the user is quickly treated for opiate dependence using unconventional methods such as induced coma and intravenous medications. The procedure is performed in an intensive care unit in the hospital or in a hospital like setting in which 24-hour medical monitoring is provided. Here’s a look at hoe rapid opiate detox works:

When the term “rapid” is used to describe opiate detox, doctors or healthcare professionals are talking about an extensive program that takes place over a period of 24-36 hours. According to LSU Health New Orleans, rapid opiate detox takes place in an inpatient hospital over the course of about a day or a day and a half at most. Some programs tout treatment for up to 72 hours but the majority of the time patients are released in under 48 hours. 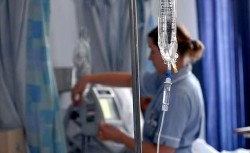 Rapid detox takes place in a medical facility such as a hospital.

According to the Center for Antisocial Drug Dependence, patients are placed under general anesthesia when they first enter rapid opiate detox. While under anesthesia, they are given an opiate antagonist that will work to speed up the withdrawal process. Giving such a medication when a patient is not sedated would be both painful and difficult to cope with as these medications are generally reserved for when withdrawal symptoms have already started to subside in the patient.

The opiate antagonist that is given during rapid opiate detox is generally either naloxone hydrochloride or naltrexone hydrochloride. Both of these drugs work to neutralize the effects of opiates on the CNS and as a result, the patient goes into an almost immediate state of severe withdrawal. Fortunately, the patient doesn’t feel the discomfort of the withdrawal because he or she has already been placed under general anesthesia.

Once the worst of the opiate withdrawal symptoms have taken place and the patient is no longer in a full state of withdrawal, anesthesia is reduced and the patient is woken up from the medically induced sleep that was taking place. Physical cravings for opiates are gone when the patient awakes but this doesn’t mean that the patient is fully healed from the opiate addiction—there is still a risk that psychological dependence will lead to relapse unless counseling and therapy are immediately sought.

Rapid opiate detox is a rather controversial method of treatment and is characterized by an array of potential dangers and consequences for the user. An estimated 50% or more who receive this treatment do relapse and there are also risks associated with the anesthesia. Before considering rapid opiate detox, one should first attempt medically supervised detox on their own as this can provide a safe, more effective means of recovery.