Chronic drinkers, binge drinkers and people with long histories of alcohol abuse know all too well how excruciating alcohol withdrawal effects can be. These same effects drive many a person to keep drinking if only to gain relief from withdrawal. According to the University of New Mexico, as many as 18 million Americans struggled with alcohol abuse disorders in 2007.

As uncomfortable as withdrawal effects can be, they pale in comparison to alcohol detox symptoms. Over the course of drinking, chemical functions throughout the brain and body realign to accommodate alcohol’s effects.

During the detox process, the absence of alcohol’s effects leaves brain and body functions in a state of near shock. For these reasons, alcohol detox programs administer one or more treatment methods that help to support damaged chemical processes and relieve the discomfort that comes with alcohol detox symptoms. 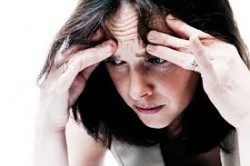 Alcohol detox can cause anxiety and depression.

By the time a person enters alcohol detox, alcohol’s effects have come to regulate neurotransmitter production in the brain. In effect, alcohol slows brain electrical activity as well as brain chemical processes in general.

Treatment methods used work to support damaged brain chemical processes and essentially pick up where alcohol’s effects leave off in terms of helping the brain regulate bodily functions. Medications such as benzodiazepines, barbiturates and anticonvulsants are commonly used as methods of treatment.

The brain’s attempt to resume normal function creates a state of hyperexcitability that sets off many of the symptoms experienced in detox. Benzodiazepines have a calming effect on brain activity, which helps reduce the severity of withdrawal symptoms. For these reasons, benzodiazepines are the first line of treatment used in detox.

While medication treatment methods work well at alleviating alcohol detox symptoms, these approaches only address the body’s physical dependence on alcohol. Alcohol addiction stems from the brain’s psychological dependency on alcohol’s effects. For this reason, anyone wanting to stop drinking altogether will require ongoing psychosocial treatment to overcome the mindset that drives drinking behaviors.