Alcohol consumption has remained a long-accepted indulgence for centuries on end. In spite of its widespread acceptance, over-indulging in alcohol use will inevitably bring on more than a few adverse health effects.

Today, an estimated two million Americans experience alcohol withdrawal within any given year, according to the National Institutes of Health. For someone trying to quit drinking, alcohol withdrawal takes the form of alcohol detox symptoms, which can bring about dangerous side effects, especially in cases of long-term alcohol abuse. 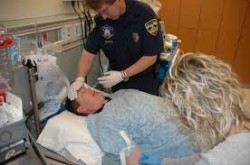 Alcohol withdrawal symptoms during detox can be very dangerous, and may require hospitalization.

After so many months or years of moderate to heavy alcohol use, a person develops a condition known as alcohol withdrawal syndrome. This condition results from alcohol’s ongoing effects on chemical processes throughout the brain and body. At this point, the body remains in a perpetual state of chemical imbalance. This imbalance accounts for the emergence of alcohol detox symptoms.

Though the brain, for the most part, functions in a diminished capacity it still tries to compensate for existing chemical imbalances. Because of its diminished capacity, the brain tends to overcompensate, throwing bodily processes into overdrive, according to the University of Maryland Medical Center. Consequently, a person experiences drastic fluctuations in body temperature, moods as well as a range of other functions.

It’s only a matter of time before chemical imbalances inside the brain start to impair a person’s overall cognitive functions. Cognitive impairments can take the form of:

Over time, alcohol detox symptoms (and the imbalances that cause them) worsen from continued alcohol use placing a person at considerable risk of developing psychological disorders, some of which include:

The dangers of alcohol detox symptoms become especially worrisome once the risk of permanent brain damage becomes an issue. The development of generalized tonic-clonic seizures is a direct result of long-term alcohol abuse.

In general, the presence of seizure activity results from a disruption in the brain’s electrical activity. As one of the most dangerous of all alcohol detox symptoms, severe chemical imbalances throughout the brain have essentially altered the brain’s physical structure.

For long-term, heavy drinkers, alcohol detox symptoms take the form of severe mental and nervous system changes. These changes bring on an advanced form of alcohol withdrawal known as delirium tremens, according to the U. S. National Library of Medicine.

Symptoms of delirium tremens include:

At this point, symptoms become incapacitating to the point where a person can no longer carry out the affairs of daily life.